Diamonds have a long history as beautiful objects of desire. In the first century AD, the Roman naturalist Pliny stated: Diamond is the most valuable, not only of precious stones, but of all things in this world.

A diamond has to go through a lot before it reaches the jeweler’s display case. It forms deep in the earth under extreme heat and pressure. It’s ejected violently upward until it arrives at or near the earth’s surface. It’s forced from its hiding place by nature or by man. Then it’s cleaved and cut and polished until its natural beauty shines through.

The world’s love of diamonds had its start in India, where diamonds were gathered from the country’s rivers and streams. Some historians estimate that India was trading in diamonds as early as the fourth century BC. The country’s resources yielded limited quantities for an equally limited market: India’s very wealthy classes. Gradually, though, this changed. Indian diamonds found their way, along with other exotic merchandise, to Western Europe in the caravans that traveled to Venice’s medieval markets. By the 1400s, diamonds were becoming fashionable accessories for Europe’s elite. 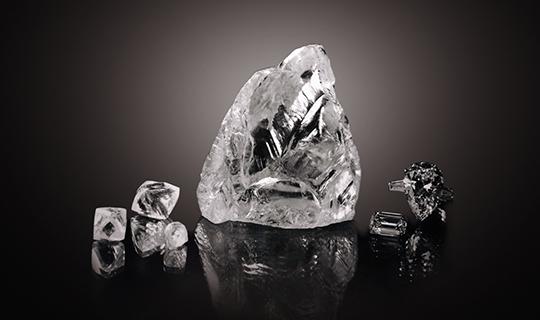 In the early 1700s, as India’s diamond supplies began to decline, Brazil emerged as an important source. Diamonds were discovered in the pans of gold miners as they sifted through the gravels of local rivers. Once it reached its full potential, Brazil dominated the diamond market for more than 150 years.

While sources changed, the diamond market experienced its own evolution. The old ruling classes—diamonds’ biggest consumers—were in decline by the late 1700s. Political upheavals like the French Revolution led to changes in the distribution of wealth.

By the early 1900s, De Beers controlled about 90 percent of the world’s production of rough diamonds. - Courtesy De Beers

The story of the modern diamond market really begins on the African continent, with the 1866 discovery of diamonds in Kimberley, South Africa. Entrepreneur Cecil Rhodes established De Beers Consolidated Mines Limited 22 years later, in 1888. By 1900, De Beers, through its mines in South Africa, controlled an estimated 90 percent of the world’s production of rough diamonds. 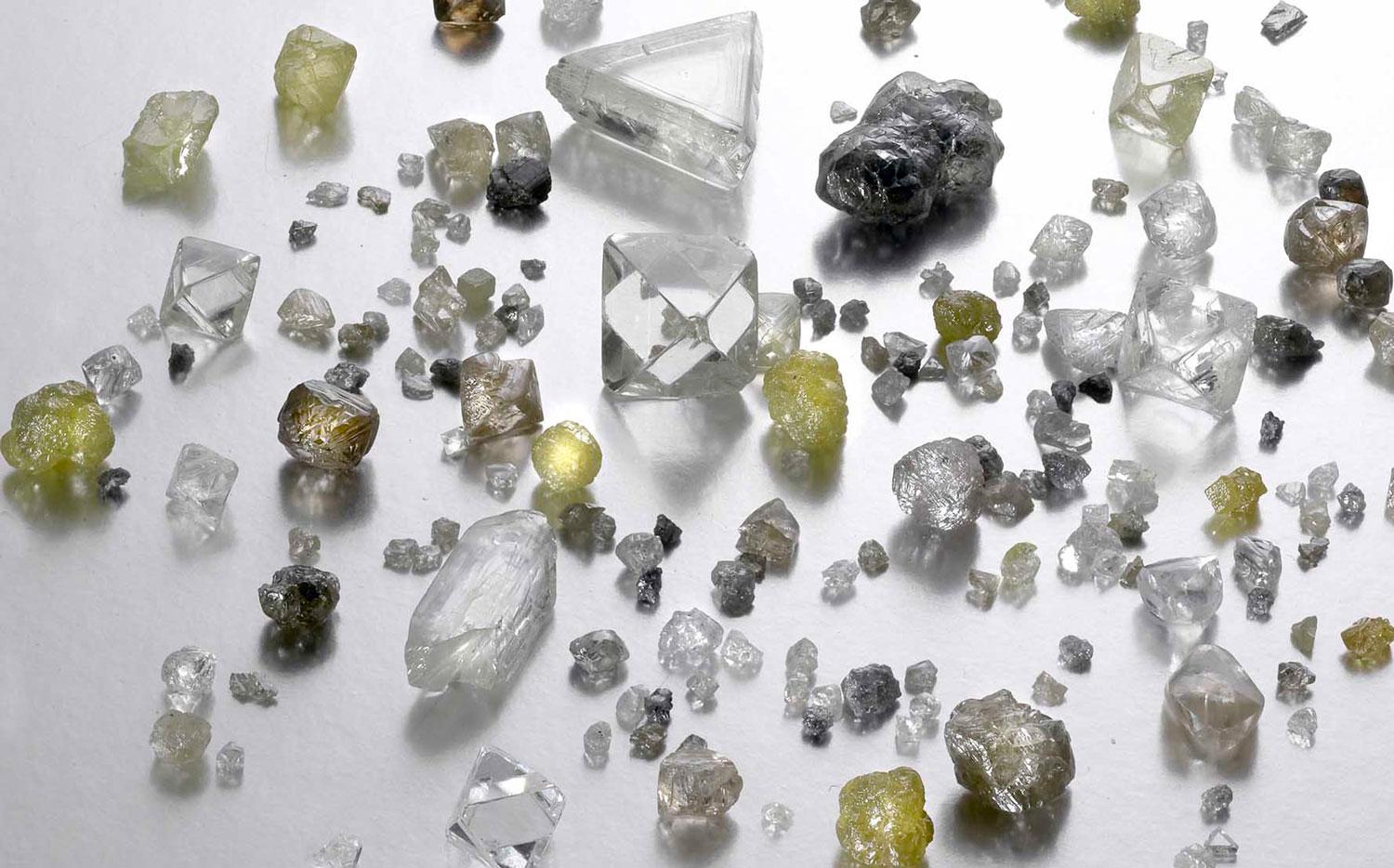 The South African sources affected many segments of the diamond industry. This was especially true as diamond mining moved from the surface to farther underground. Because of the huge costs and comparatively low yields involved, the new sources forced the development of more efficient mining techniques. They created the need for better marketing. They also led to advances in cutting and polishing—advances that increased efficiency, reduced costs, and enhanced the appearance of finished stones.

The market probably changed as much after 1990 as it did in the years after the 1866 discovery of diamonds in South Africa . The 1990s brought exciting new sources and encouraged the dramatic growth of some cutting centers. All this was happening as the world economy fluctuated wildly.

Only since the beginning of last century diamonds have become also the symbol for love.

In 1939 launched a marketing campaign with N.W Ayer & Son in an attempt to revive the to revive the American diamonds market. Aimed at young men linking the idea of diamonds in wedding rings to true romance. Women, too, would be targeted with the idea that no courtship would be complete without a sparkling diamond.Famous houses of worship were featured in follow up advertisements, establishing a link between diamonds and the sacred tradition of a religious wedding. In the marketing campaign the used the , now iconic , slogan : diamonds are forever.

It was also in the 20th century that experts in gemology have developed methods of grading diamonds based on the characteristics that define their value as a gem. These four characteristics knows as the four C's are now commonly used to describe the diamonds : these are carat (its weight) , cut (quality of the cut is graded according to proportions, symmetry and polish), color ( how close to white or colorless) and clarity ( how free the diamond is from inclusions).

Most Popular Shapes Of Diamonds

There are many shapes of diamonds to consider when buying a new diamond for your engagement ring or other diamond jewelry. How the diamond is shaped has a significant impact on its appearance. The most popular choice is the brilliant cut or round cut diamond,

although modern consumers prefer alternative shapes like the princess or radiant diamond.We have listed some of the most popular diamond cuts  which you can also find on our site. 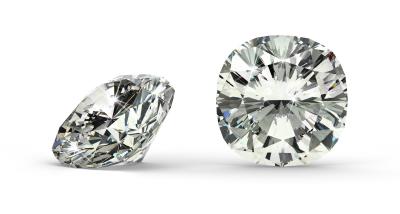 The round cut diamond is the most popular diamond shape accounting for almost 80% of all diamonds on the market. The structure and shape is superior to fancy shapes because it maximizes the reflective angles of light, increasing brightness and brilliance over any other cut viewed under similar conditions. 57 to 58 facets

The most popular shape for fancy diamonds, the princess cut has become a favorite for engagement rings. The brilliance and forgiving cut are highly desirable for most budgets and flexible enough to accommodate a large variety of ring styles. 53 to 54 facets 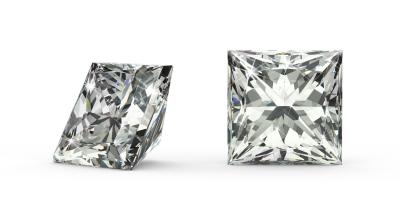 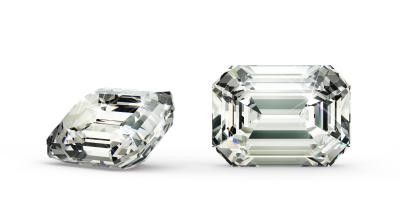 The oval diamond is a variation on a brilliant-cut diamond (the most popular cut for a round diamond). Both round and oval diamonds have similar brilliance and effect. Oval cut diamonds are more elongated and can create the illusion of larger size. 55 to 56 facets 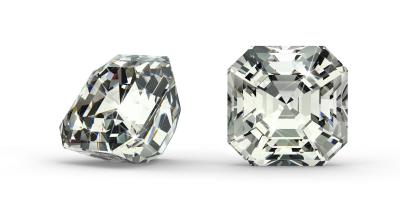 A cleanly faceted cut diamond that brings out a shallower table. The asscher cut diamond is similar to the emerald cut, but is square in shape with larger step facets, a higher crown, and a smaller table. This generally makes an asscher more brilliant than an emerald cut. An asscher cut provides a clear view into the center of the stone and will make any inclusions clearly visible. Best for an H Color or better. 48 to 49 facets 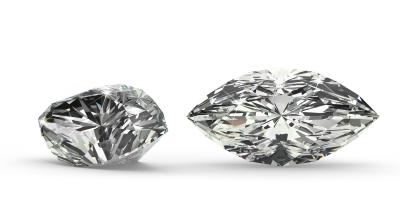 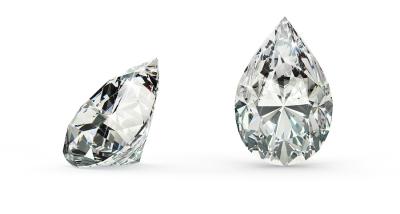 The pear cut diamond is a teardrop shape that has a round or oval shape on half the facet pattern while the other half resembles a marquise with the sides tapering to a point. The pear shape is a combination of the round and marquise brilliant cuts and may have the standard pattern of brilliant cut facets, but can be cut with varying facets of the pavilion. 56 to 57 facets